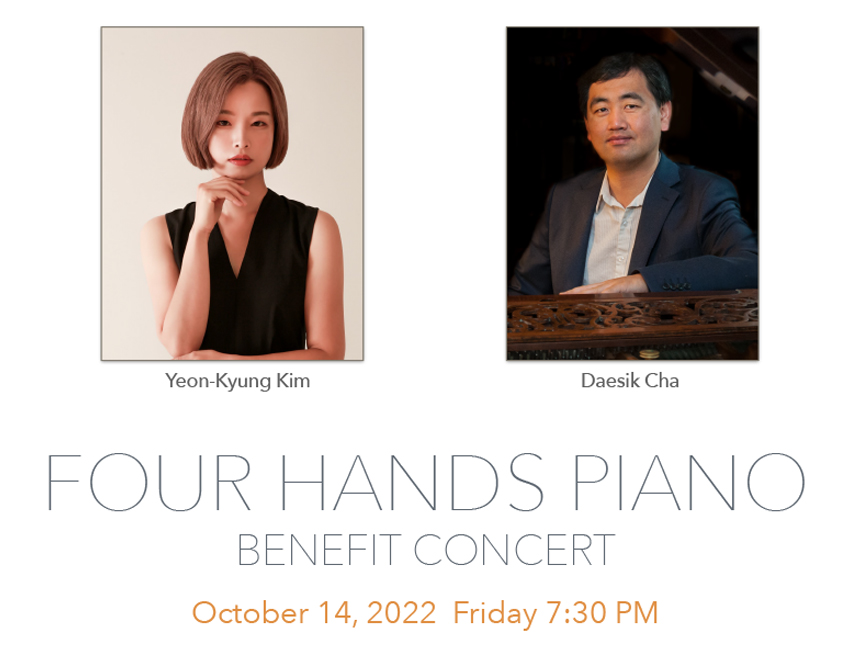 You are invited to a Four-Hands Piano Recital on Oct 14, Friday at 7:30 PM at Knox Presbyterian Church. Pianists Daesik Cha & Yeon-Kyung Kim will collaborate in great four-hands works of Brahms’ Rhapsodies, Schubert’s Fantasie in f, and challenging Stravinsky’s ‘ballet russe” from his ‘Petrushka’. This will be a delightful and varied musical evening that you will enjoy.

Donations raised at this concert will be used in supporting young musicians and in creating community concerts.

Daesik Cha, a native of South Korea, has been establishing himself as a ‘renaissance’ musician, whose professional work encompasses concertizing, directing, teaching, and music scholarship.
He has appeared as pianist in several prominent concerts across continents. In the US, he was featured as a chamber musician with the Irving Fine Society at Harvard’s Sanders Theater, and performed as a soloist in the Franz Liszt bicentennial at Brandeis University. In addition, he has been invited several times as a musical artist to the Tempa Art Club in FL, giving lectures and recitals. Recently he performed a piano recital at the Killian Hall in MIT and a lecture recital at the SMI international music conference in Belfast, Northern Ireland. He also appeared in several prominent chamber music recitals in the Boston area. His piano recital at the Historical Shirley Meeting House was aired on a local TV channel. His other performances include recitals at the Frederick Collection in Ashburnham MA, La Grua in Stonington CT, Shaker’s Museum in Enfield NH, and many other concert venues in the New England area. He was also invited to give a recital at the Bechstein Hall in the Master Musician Series of Bilthoven, Netherlands.
He wrote his PhD dissertation on the topic of “Transformation of the Keyboard Fantasia in the Classical Period (1780–1800).” His scholarly interests lie in the German instrumental aesthetics and literature of the Classical and Romantic eras. He was a teaching fellow at Brandeis University, and is currently teaching and performing at MIT.
He holds a PhD degree in musicology at Brandeis University and two Master’s degrees, in music history and literature and in piano performance.

Pianist Yeon-Kyung Kim regularly performs as a solo pianist and a chamber musician. She performed at multiple venues at University of Cincinnati College-Conservatory of Music (CCM), in Northern and Southern Indiana, Detroit Metropolitan area including Ann Arbor, and in Seoul, South Korea. She is a 1st prize winner in Chamber music at Seoul Art Concours, where she played as an initial member of Quartet Y. She also presented at masterclasses for John O’Conor, André Watts, Peter Takács, and Warren Jones. Her coaches include Kenneth Griffths, Anne Epperson, and Amy Cheng, to name a few. Kim has served as a rehearsal pianist at CCM Opera for two consecutive years and was recently appointed as a staff pianist at Western Illinois University.
Yeon-Kyung also has grown her passion in teaching. She maintained a private studio in Cincinnati, OH, and has taught piano group classes and private lessons as a Graduate Assistant of Secondary Piano of CCM. On top of teaching, Kim presents her pedagogy research at the National Conference of Keyboard Pedagogy (Frances Clark Center) and Music Teachers National Association Conference, regionally and nationally. Most recently, her article on asynchronous teaching video was featured in American Music Teacher, a peer-reviewed journal of MTNA.
As an advocate of performing arts and showcasing young artists to their community, Yeon-Kyung has founded a non-profit organization, Glow Music. In 2022, She presented the piano solo pieces by Korean composers to the Cincinnati audience. The next concert of Glow Music will include songs of Eastern languages.
Yeon-Kyung is from South Korea and now in the final phase of her DMA in piano performance CCM. Her teachers include James Tocco, Aviram Reichert at Seoul National University, Christopher Harding at University of Michigan, and Emile Naoumoff at Indiana University. She has been a scholarship recipient throughout her music education.