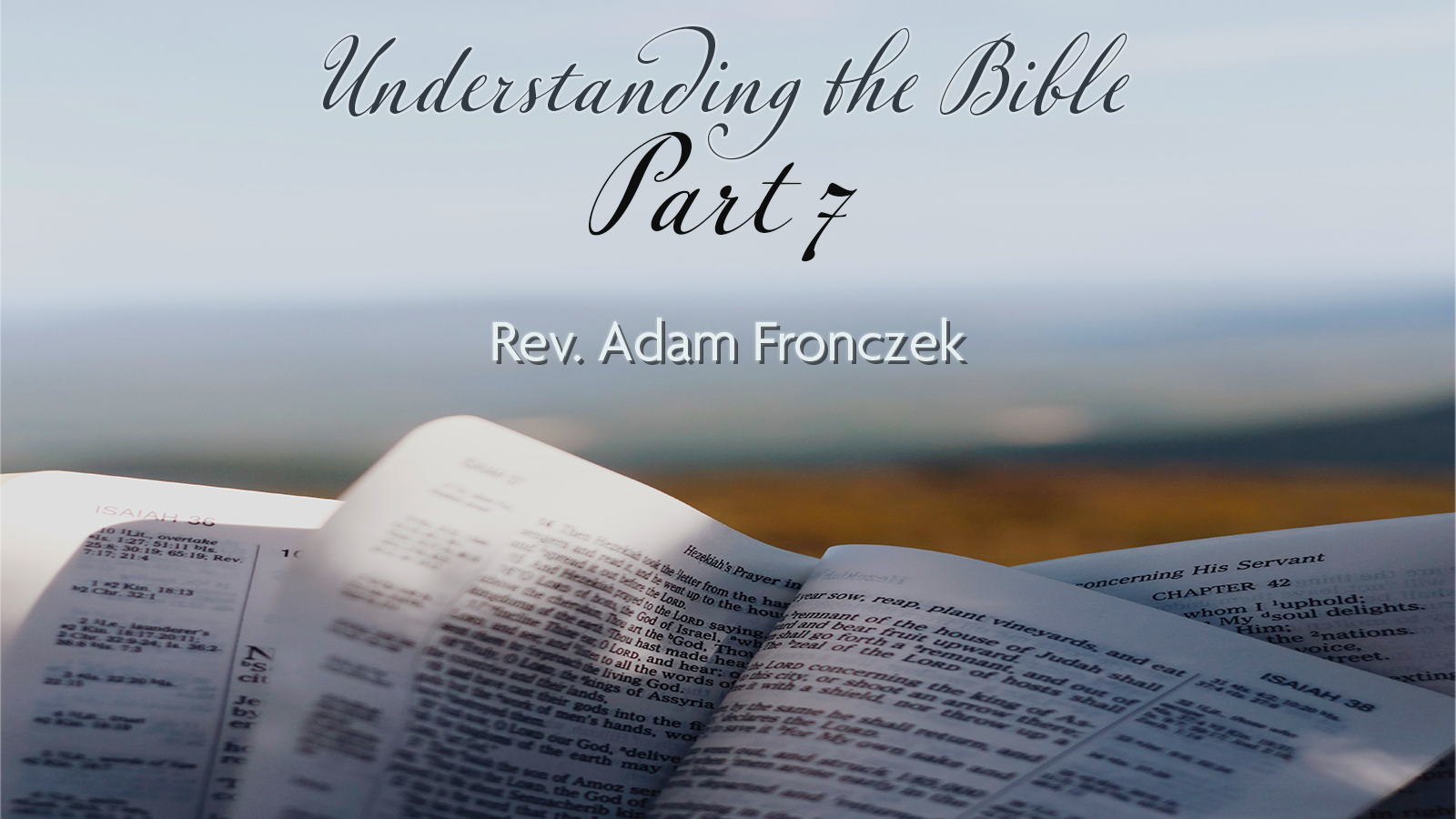 I mentioned Elaine Pagels earlier in this sermon series.  She’s one of the most important biblical scholars of the last century.  She’s also written a recent memoir called Why Religion.  In it, she seeks to reconcile her Knowledge of the Bible and religion with the grief and loss in her life, including the shocking deaths of a young child and of her middle aged husband.  Hers has been a powerful and mysterious spiritual journey, and the last sentence of the book reads:  “However it happens, sometimes hearts do heal, through what I can only call grace.”

In this last sermon of the Understanding the Bible series, we’re going to look at the second half of the New Testament.  Grace—which I will define here as the mysterious and restorative love of God—grace has central place in this part of the Bible.  The second half of the New Testament is mostly composed of letters.  They were written by early followers of Jesus to new church communities trying to find their way.  In these letters, the Apostle Paul brings the idea of grace to the front.  Grace is central to his understanding of God and Jesus Christ, and today we’ll see how that idea fits with the covenant theme we’ve been tracing throughout scripture—a covenant created, broken, and restored.

In the previous lesson, we talked about the four Gospels, which tell the story of Jesus’ life on Earth.  The remainder of the New Testament tells the story of what happens next, as the early church takes shape.  This is the story of followers of Jesus figuring out how to live according to his way now that they no longer have his daily presence and teaching.

The story is told in two ways.  The first is in the Book of Acts.  Acts is a continuation of the Gospel According to Luke, written by the same author.  It traces the story of how the followers of Jesus spread the message of his life and work, first in and around Jerusalem, and then beyond.  This work happens primarily under the leadership of Jesus’ disciple Peter and then under Paul, who did not know Jesus, but has a powerful conversion experience of the presence of the Holy Spirit and then becomes Jesus’ greatest evangelist.  Acts is a collection of stories and sermons that narrate the dramatic, Spirit-led development of the early church.  It is inspirational and purposeful and gives the sense that these disciples knew what they were doing and understood their shared mission.

The rest of the New Testament is a quite different telling of the same story.  It is a collection of letters, written mostly by Paul and his followers.  The letters are to specific churches they have founded as they traveled to spread the message of Jesus.  They advise young churches of the marks of a Christian: the beliefs, practices, worship, and personal behaviors that should be adopted by followers of Jesus.  The letters describe matters of belief like grace or forgiveness; they describe practices like generosity and acts of worship like baptism and Communion, and they describe personal and communal behaviors like kindness and justice.  These are all markers of what it looks like to live according to the way of Jesus Christ.  The letters are named for the communities to which they were written:  Romans to the church in Rome, Corinthians to Corinth, and so on.  Many of them were written by Paul, or by one of Paul’s students, and some by other emerging leaders in what was then a young church.  The letters are different than the Book of Acts.  They are full of not only instruction, but debate and argument.  They offer corrections when missteps have taken place.  They leave no doubt that Jesus’ early followers struggled to agree on the right way to follow him.

Taken together, the Book of Acts and this collection of letters looks a lot like the church today.  Acts tells an inspiring, unified story.  The letters, by contrast, describe the challenges, arguments and the everyday grind of the early church.  In today’s readings, both Acts and Paul mentioned the covenant, but one account was about how its being lived   If you compare them to the church today, Acts is like reading the Annual Report; the letters are like attending all the meetings that led up to it.  In the church today, sometimes we are about the work of telling a coherent organized story of what it means to be follow Jesus and be church together, our ministries thrive and we welcome new people.  Other times, we are reacting to specific circumstances that arise in our ministries or our community—we’re searching for a new pastor or planning a budget, or trying to figure out the most faithful way to serve Communion in a pandemic.  Like the early church, sometimes our stories are joyful and centered around the guidance of Jesus; other times the church is a real mess because, well, it is the collective gathering of a bunch of regular flawed human people doing their best but making plenty of mistakes along the way.  These are the kinds of stories that form the second half of the New Testament.

Now that we’ve talked about the basic material that is found in Acts and the letters, let’s take a step back and talk about how these books fit into the larger story of the whole Bible.  Throughout this series, we’ve been talking about a theme; a repeated cycle into which the stories of the Bible fit.  A covenant—God’s way of life—is created, broken and created again.  God creates a covenant with human beings, offers a relationship and a way of life by which we should live.  Sometimes people participate faithfully in God’s way of life, but inevitably, we go our own way, and the covenant is broken.  But God is faithful and steadfast in relationship with creation, and so God extends forgiveness and the covenant is restored.

In the New Testament, we see this pattern played out first in the Gospels through the life of Jesus.  God sends Jesus into the world as a renewing of the covenant that the people have broken.  In his ministry, Jesus lives and teaches God’s way of life.  But while some follow Jesus faithfully, many resist his Gospel of love, ultimately putting him to death on the Cross—the covenant is broken.  In the Resurrection, God restores the covenant once more, and the Holy Spirit is the presence in the world that is a sign of God’s enduring covenant.

In the part of the New Testament we are studying today—Acts and the Letters—a new challenge has arisen.  Jesus is now gone.  His followers are on their own.  Without Jesus in ministry among them each day, the people of the early church must figure out as best they can how to keep living according to God’s way.  Acts and the Letters tell the story of that struggle.  As the followers of Jesus debate and exchange letters about right belief and practice, worship and behavior.  In each of those ways, they are trying to figure out how to be faithful to God’s covenant.  Inevitably, they screw up along the way, and thanks to what Paul refers to as grace, we are accepted by our Creator for the flawed and imperfect people we are, and God keeps on renewing the covenant with us.  In this way, the early church lives again the theme we’ve been talking about all along, of a covenant created, broken, and restored.

Having spent most of 7 lessons now talking about this covenant cycle, the obvious question to address before we close is:  when will it end?  As an admittedly oversimplified answer to that question, I direct you to the familiar words of the Lord’s Prayer in which Jesus teaches his disciples to pray: “Thy kingdom come, Thy will be done, on earth as it is in heaven…”  The Kingdom of God is Jesus’ way of describing the world as God created it to be—it is the ultimate restoration of the covenant.  And while Jesus’ ministry shows glimpses of it, and so does the church then and now, the Kingdom of God is mostly an aspirational idea—it has not yet arrived, and only God knows when it will.  For now we are stuck in this world where the covenant keeps being broken.  Thankfully, God keeps loving us, but we have to find that love in the midst of the brokenness, and are left to wonder when the kingdom will come.

If the kingdom isn’t coming today or tomorrow, if world is bound to remain in a state of brokenness for some time to come, how are we supposed to manage in the meantime?  That brings me back around to where I started this morning with that reference to Elaine Pagels, who in describing her own struggles, has said:  “However it happens, sometimes hearts do heal, through what I can only call grace.”  Grace is this mystery by which, time and again, God takes the broken pieces of our lives and renews a covenant with us so that we can keep on living.  The renewal of the covenant does not guarantee that things will not fall apart again, but it does promise that no matter what, God will be with us.  This is consistent with the story we’ve been telling throughout the Bible.

My favorite one sentence summary of the Bible is something I once heard said by a Pastor named Craig Barnes.  He that in the first three chapters of the Bible, the world is created and things fall apart, and everything that comes after is a recovery plan.  I think there’s a lot of truth to that.  The Bible is a story of a relationship between God and Creation, one that stumbles and falls again and again, but God keeps renewing the promise, welcoming us home, and yearning for a day when we will live together in the harmony and peace for which we were created.  It is a vision worth striving toward for all of us.  And thanks to the grace of God, we can.  That may not be the best way of understanding the Bible, and it is certainly not the only way.  But at in this season and in my current place on the journey of faith, this is how I understand it.  And I am thankful to be on this journey with all of you.  Amen.